Yoga is unnatural for men?

Yoga may seem at first glance to be a rather unnatural occupation.  I’m a 40 year old man and I just don’t bend like a contortionist anymore.  In fact I never did.  Why on earth would I want to tie myself in knots?  What’s in it for me? Did I mention that I’m a man too.  Yoga is for girls right?  Real men don’t do that sort of stuff.  I may as well join an aqua-aerobics class while I’m at it.

Yoga is for men

How wrong I was.  Yoga is most certainly for men too.  In fact it was developed by men and was initially solely practiced by men in India.  It turns out that there is much more to yoga than I realised.  I was one of those men who scoffed at other (lesser) men who admitted to practicing yoga. I thought of Yoga as being a nice relaxing and fairly effortless activity that women (who didn’t know any better) called exercise.  That was before I did my first yoga class. Yoga is not easy.  It can be very physically demanding, particularly during those first few classes.

How I ended up in a Yoga Class

Having read what I’ve written so far you may be wondering how I ever ended up doing a yoga class to start with.  The truth is I didn’t want to go.  I had a pregnant partner and to keep her off my back I agreed to go along to a class.  Anything for a bit peace right?  After all, I wasn’t likely to have to put much effort into it. The following day I was stiff.  I don’t mean stiff, like when you sleep in an awkward position.  I mean stiff like I was after running a marathon.

Should I go to the Gym or do Yoga?

This is where I started to get really interested in Yoga.  I never really enjoyed the gym, but I, like many other people thought that it was the only way to bulk up and make myself more physically attractive.  Pumping weights builds strength but it also diminishes flexibility.  We’ve all seen the muscle bound hulks that can hardly turn around.  Yoga helps you to get strong without sacrificing movement.  In fact it improves movement radically and this makes you less prone to physical injury during that football match or any other sport. 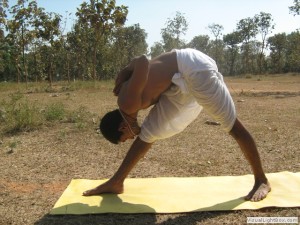 Try this yoga position if you think you’re hard enough!

Don’t believe me?  Try holding the pose on the right for 2 minutes!  I can do it.  Can you?  This is probably the best hamstring stretch you can possibly do.  Not only that but it also is good for the hips, the spine.  It even helps to correct drooping shoulders, so stop slouching and give it a go! WARNING!!!! Don’t overdo it.  This is much harder than it looks.  If you have not practiced yoga for a considerable time do not expect your chin to reach your knee while your leg is straight.  Above all do not force the position.  Forcing strong stretches like this will lead to injury.  If you have a bad back do not attempt it at all without guidance.

The truth is that as a man in Ireland you are likely to be in the minority in a yoga class.  Don’t let that put you off though.  Many top athletes practice yoga because it helps improve core strength and improves resistance to injuries. Call Wicklow Yoga now and book yourself in.